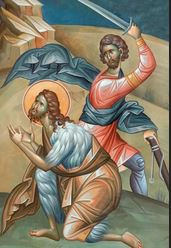 Deliver me from bloodguilt, O God, the God of my salvation, and my tongue will sing of Your righteousness.

I began to write this on the day in the Orthodox church when we commemorate the Synaxis of St. John the Baptist – the remembrance of the life and ministry of St. John in the context of his singularly cosmic ministry, the Baptism of Jesus.

The ministry of St. John was tough to deliver – here are some of his exhortations as St. Luke reports them in Chapter3:

“You brood of vipers! Who warned you to flee from the coming wrath?  Produce fruit in keeping with repentance. And do not begin to say to yourselves, ‘We have Abraham as our father.’ For I tell you that out of these stones God can raise up children for Abraham. The ax is already at the root of the trees, and every tree that does not produce good fruit will be cut down and thrown into the fire.”

In the end, it got him beheaded.

I’m thinking that if God called most of us today to such a ministry we would run in the opposite direction. To speak so is foolishness – and usually ineffective.  Unless such words are filled with the Spirit of God. But the Spirit of the Lord was forming St. John’s words in that time and place, in which case these words of truth became a new beginning to self-understanding based on repentance.  This ‘hell’s fire and brimstone’ approach can break through the spiritual apathy which plagued the people of St. John’s day, and ours as well.

It’s hard to preach this.  I know.  People prefer to believe a social philosophy of  ‘I’m Ok and You’re OK’[i].  This  way of thinking about oneself means that if something is wrong, I’m not to blame.   It has led to all manner of social changes, because it shifts personal responsibility from interior motivations and accountability to external forces – social, biological, genetic, communications, etc.  This shift, even with Christian social culture, results in things like the  breakdown of all manner of) discipline of children in homes – not just physical but any ‘punishment’ -to the broad-based permissiveness of all things sexual (including promiscuity, homosexuality, gender confusion, etc.)  The theory of this psychology cuts off the person from her deeds – meaning that what I do might not be OK, but I’m still OK, so I’m not responsible for my behavior. Now while Orthodox Christianity affirms the fundamental goodness of all people based on their creation in the image of God which cannot be extinguished, Christianity also affirms that our sins mutilate us inwardly – psychologically, emotionally and spiritually.  And because of this, our behaviors are not OK and because these behaviors proceed from the heart, it means I’m not OK.  Hence the need for repentance, and with God’s forgiveness and healing, we become more than just OK.

Cutting to the Chase

St. John’s exhortations are harsh; they are harsh but strong medicine that is received through the ears to reach the soul. In hearing this type of preaching, just as in the preaching of St. Peter in Acts 2, the person who hears this is cut to the heart and acknowledges his state and begs the question, “What must I do, to be made right with God.”  And both St. John and St. Peter point to the Lord Jesus, the Lamb of God who takes away the sins of the world. (Jn 1:18ff, Acts 2:37f)   It becomes a matter of faith – believing in the Person of Jesus Christ and His divine mission of the salvation of me and the restoration of (my) world.

This passage, like so many Old Testament prophecies, is seemingly harsh but only because it is truthful.  The truth is sometimes hard to take. The truth about sin in the world (socially) and our life (personally) is ugly and harsh.  But the Good News is so overwhelmingly good that God does not desire that we continue this way, but repent and live. This is consistent with all that is said before.

What strikes me about this though, is that it was (in the cases of St. John and the apostles) successful.  Hearts were changed!  The wicked were converted!  The preaching of repentance bore fruit because the Word of Truth bears fruit in the human soul when it is received.

The people who ended up coming to St. John, and to Jesus, and to the Apostles, looking for salvations were the ones like the greedy tax collectors, seductive harlots, cruel soldiers and others on the outskirts of society who knew who they had become inwardly because of what they had done.  And they had enough it. And turning to the strange prophet, the Rabbi, or his Apostle, they would come in all humility and just acknowledge they are who are because of what sin had done inside of them.

Because we live in a culture of denial – which is founded on a fear of causing offense or feeling weak or broken, those preaching in this manner will be quickly swept up (like St. John was) and will be thrown into a confinement of one sort or another – either criminals because of their ‘hate’ speech – doing things like calling homosexuality evil and calling for repentance.  Or they may be sent to  Soviet-style ‘psychiatric hospitals’ until their story and thinking (message) has been ‘reprogrammed.’  This is nothing new – St. John’s message and that of St. Peter got them both locked away, and eventually martyred.

But they were effective because the Truth of the Spirit was in their words.  The Word of the Lord through the Prophet David is true, “the wicked shall return to You.”

An Act of Freedom – Never Forced

Eastern Christianity teaches us that all sin is slavery and to act according to God’s law is the only way to be free. Conversely, those who acknowledge the truth about themselves regarding sin are the ones who are on the path to becoming truly free.  As Jesus warned the unrepentant Pharisees, “Your sin remains.” (Jn. 9:41)  They were slaves bound to their thoughts and hence to their sins, which Jesus calls a self-imposed spiritual blindness.  They were chained to the darkness – yet we know the good news from the Gospel according to St. John, that some like Nicodemus and Joseph of Arimathea did accept Jesus because they accepted His words, and His forgiveness, and were truly set free.

Because repentance is an act of grace, prompted by God, it cannot be forced.  Yes, Mom can force her kids to go to Confession, but  it’s quite possible to go through the motions and never honestly accept that I need forgiveness from God (and others) which is immediately available through Confession.  Furthermore, I don’t deserve His forgiveness but He gives it to me out of His sacrificial love.  This is why al Christian forgiveness comes from the font of the Cross in sacrificial love – the wages owed by sin were very high.  Similarly, seeing the price of sin is all the more reason to rush to seek forgiveness now, before it is too late.  However, penance cannot be coerced – by a parent or a priest.  But the opportunity is always offered, the door is always open to us, the wicked. Until the day of Judgment (or death – whichever comes first) when it will be closed.

The Message of Lived Repentance

Like John, let us not force repentance on others but live it and announce it and warn of the dangers of sin and God’s coming judgment. The ax is laid at the root. Sin like chaff is burned in fire. Repentance is winnowing. It allows the chaff to be separated from the wheat so that the worthless chaff can (as it must) be burned. But the precious seed, the heart of the kernel which has life is saved and is even potent to bring forth new life.

Fruitfulness of the truly repentant becomes a source of grace for others.  Starting with the aforementioned Apostle Peter, his apostolic brother, St. Paul, and so many of the saints known sometimes worldwide for their sins, their repentance becomes all the more a powerful witness to the saving love of a merciful and forgiving God to all who hear them, meet them, and experience God’s forgiveness through them.  This is how the world is saved..

IT WILL HAPPEN.  But it only happens completely in the grace of God.  We will usually stand on our wobbly leg of self-justification until we collapse. And protest – ‘I’m OK.’  In that moment, God forgiveness can still embrace us in our fall. Ω

[i][i] This the title of a self-help book by Thomas Harris from the mid-seventies. It would be far too simplistic to blame a single book as the root of social problems, but by affirming people in a certain way, this way of thinking can lead to a disconnect with the true self, a ‘feel good’ approach to life and ultimately self-justification and irresponsibility.  This idea is not new at all, but all but ubiquitous in western societies today.  Ironically, often people are told ‘You’re OK’ which becomes a lie and deep down resent it as unhelpful, because the burning truth is that ‘I’m not OK and I know it! The voice of conscience, the word of the Spirit, affirms us in what is truly good within – and also what is not.

A semi-retired Priest of the Ukrainian Orthodox Church of the USA. View all posts by Fr Robert Holet - UOC of USA Office of Stewardship

Processing…
Success! You're on the list.
Whoops! There was an error and we couldn't process your subscription. Please reload the page and try again.